On June 5, 2015 in Honolulu, Hawaii, Almarie Nava and Brad Macloves welcomed their first child, Mason Kekoa Nava Macloves. Born early at thirty-three weeks, Mason weighed just 4lbs 0.4 oz and was 16.14 inches long. Despite his tiny frame, Mason was born perfectly healthy and did not need any assistance that most premature babies required. He spent 19 days in the NICU getting treated for jaundice and observed for growth and eating. He continued to surprise his doctors and nurses with his quick progression and was discharged from the hospital on June 24, 2015, healthy and strong.

Visit after visit and chart after chart, Mason quickly caught up to national growth comparisons of full-term babies by the time he turned 3 months old. His doctor no longer called him tiny and at one point, even suggested that his parents control his tenacious appetite! In the following months, Mason steadily began accomplishing his development milestones: grasping and holding objects, rolling over, recognizing his name, holding his bottle, babbling, and smiling and laughing endlessly.

Mason loved his parents, so much so that he preferred interacting with them over any of his toys. When he wasn’t enjoying playtime with his parents, Mason entertained himself by sucking on his fingers (yes, not just his thumb), biting the nose of his Laugh ‘n Learn Puppy, fiddling with the tags of his Taggies lion blanket, listening to music from his BeatBo, and occasionally watching an episode of his favorite show, Mickey Mouse Clubhouse. Mason was fascinated with new places, eagerly looking at his surroundings and people passing by… even if it was only through the tiny hole of his stroller shade covers when his parents closed it. He enjoyed car rides and often stayed awake during the longest drives staring out the window.

Mason was able to create lasting memories with those who loved him. He spent Halloween dressed as Superman and giggled in excitement on Thanksgiving when asked if he wanted turkey and stuffing in his milk. For Christmas and the New Year holiday he took a trip to Maui to meet the rest of his family. Surrounded by cousins, aunts and uncles, and his grandparents, Mason opened presents and played unfazed by the sound of fireworks… Mason couldn’t have been happier. He did what he always did and stole the hearts of those he met with his adorable smile and contagious laughter. Life was great for Mason and his family.

On January 25, 2016, Mason underwent a surgical procedure to fix a non-life threatening and common condition, where chances of complications were less than 3%. After a week of constant doctor contact, visits, and no diagnosis for a steady fever, loss of appetite, decreased urine output and fatigue, Mason was taken to the Emergency Room on the morning of January 30, 2016. Unaware of the severity of the infection that was taking place, Mason remained undiagnosed for two hours. Only after his blood results became available did Mason’s parents learn that he had contracted an infection that was causing very abnormal blood counts and needed antibiotics administered immediately. They were told his condition was critical and that Mason would be admitted to and cared for in the PICU.

Later that Saturday night Mason’s parents were informed that Mason not only had an infection, but that it was developing into sepsis. Unable to soothe his crying, Mason was sedated. Little did they know, it was the last time his parents would see him conscious. As one can imagine, that day was terrifying but the days to follow only got worse.

By Sunday morning Mason had gone into septic shock. His kidney was the first to start failing and was the reason for his decreased urine output. Doctors and nurses surrounded his bedside, contemplating on the type of care and medicine he would need. Mason was treated with an array of antibiotics to cover all possible infections until the doctors could identify the type of bacteria and zero in on the specific antibiotic to treat it. The results confirming the bacteria would not be available until a couple days later. Treatment consisted of a lot of fluids but because his kidney could not flush them out quick enough, swelling began to occur. There was nothing more to do but sit, wait and pray that Mason would react to his treatments.

Monday started with a staff meeting with over 15 doctors and nurses huddled as they discussed Mason’s condition, a staff meeting that occurred daily for the next three days. Mason showed no signs of improvement. The staff concluded that Mason was in need of a machine very similar to those used for dialysis patients. The machine would extract his fluid and blood and filter out the bacteria and toxins, and put the clean blood and fluid back into his body. Later that afternoon prior to the start of the new machine and while Mason’s parents talked with a medical social worker, Mason unexpectedly went into cardiac arrest. His heart was the second organ to start failing. Mason’s parents stood in horror as the nurse began to perform CPR. Others gathered to offer assistance until the Resuscitation Team arrived. His parents frantically watched as each person took turns in trying to revive Mason’s heart. It started to beat but minutes later it stopped again. Mason as weak as he was, must of heard his parents cries and pleas for his return even in his unconscious state, and fought hard to get his heart to beat again… and he did. It soon proved however, despite the courage and strength of this little baby, that it would not be enough.

Mason’s parents were introduced to the PICU’s lead doctor who explained that Mason’s heart and lungs were so weak that he could no longer perform the vital functions to survive on his own. With their consent, Mason was put on ECMO (Extracorporeal Membrane Oxygenation) in hopes that he could rest and build strength to do these functions on his own again. ECMO assistance provided a 50/50 survival rate with severe complications most prominent when used on infants. With two critical machines along with others monitoring his vital signs, Mason’s care required four staff members at all times to operate each apparatus, and space equivalent to two rooms. There was no longer space for his parents to stay by his bedside. Determined to never leave the hospital however, his parents sat in the aisle on uncomfortable chairs for hours and slept little in a room next door to the PICU.

By Tuesday, the results of Mason’s culture was available and identified gram-negative rod bacteria as the culprit. Gram-negative bacteria infections is defined by the CDC (Center of Disease Control) as infections including pneumonia, bloodstream infections, wound or surgical site infections, and meningitis in healthcare settings. Gram-negative bacteria are resistant to multiple drugs and are increasingly resistant to most available antibiotics. Mason was dubbed by one of his doctors as “the sickest person in the state.” His case prompted a personal visit from a representative from the CDC for evaluation and to clarify antibiotic treatments.

For the first time in days, Mason’s parents had seen a glimmer of hope. After all, he was getting the right medicines and his weak organs were resting… but their hope was short lived. During the night of February 2, Mason suffered a severe complication while on ECMO and developed a massive bleed in his brain. The machine that was supposed to help him was now hurting him but without it, Mason could not survive.

On Wednesday, February 3, Mason’s parents were told there was nothing more the doctors could do. Mason passed away at 12:13pm, held tightly in his parents arms, surrounded by his aunt, uncle and grandma, while listening to his parents sing his special song and his favorite music from his BeatBo toy.

There is still so much uncertainty and questions surrounding Mason’s passing and the delayed diagnosis of his infection. Although tainted forever with this painful loss, Mason’s family and friends are determined to remember Mason Kekoa and the joy he brought to each of their lives. It is in his memory and in his name that they hope to share sepsis awareness. 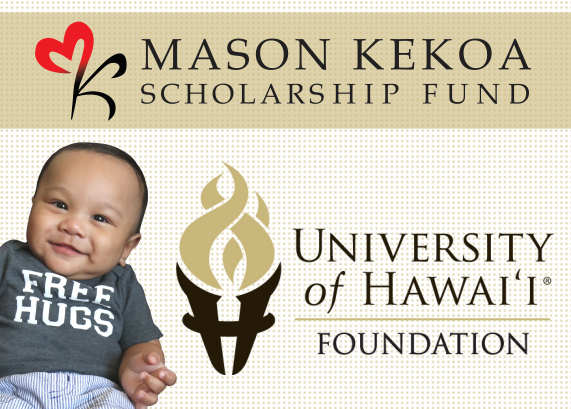